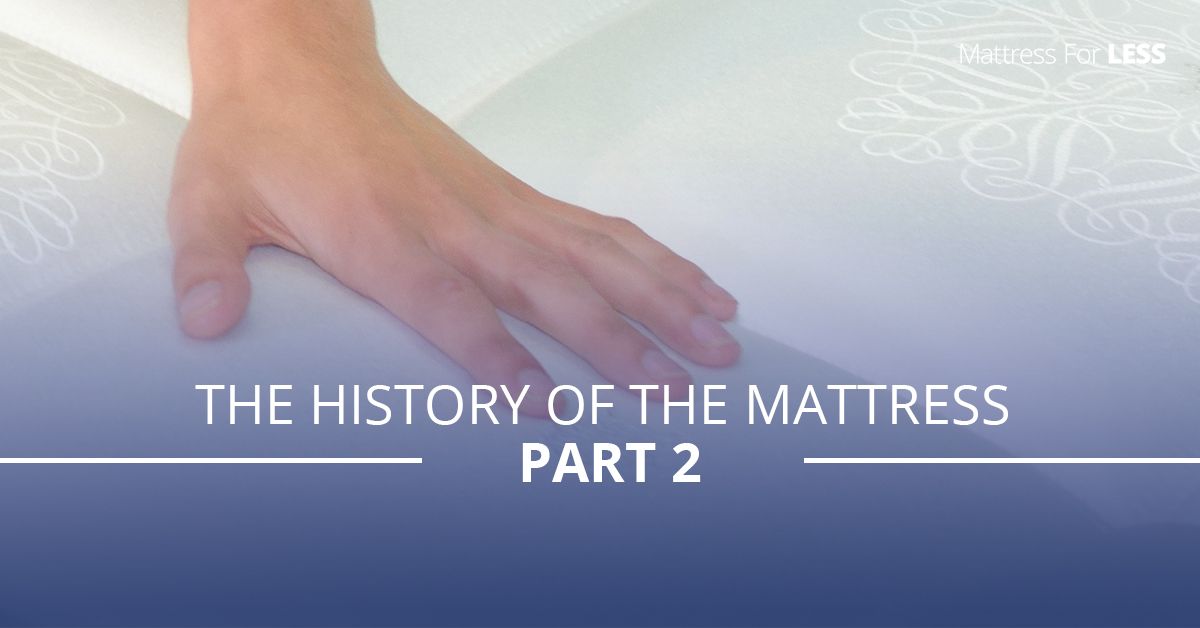 The History of the Mattress - Part 2

Welcome back to the Mattress for Less blog! In our last blog post, we looked at the evolution of the mattress. Unfortunately for our ancestors, mattresses weren’t the customized, comfortable, clean things that they are today. Often mattresses were dirty holes in the ground with foliage for cushioning, stone slabs, or straw. However, not all ancient peoples slept on archaic mattresses. For example, the Egyptians slept on elevated slat beds. Read part one of our blog series or continue on to part two of our brief survey of the history of the mattress.

Medieval life has always been romanticized as a world of knights instilled with valor and young, beautiful maidens; a fairytale world. However, the reality of life for most who lived during that time is anything but romantic. Life was hard and life expectancy incredibly short. The beds themselves were usually made of straw, grass, or bedstraw stuffed into a linen mattress bag, but if you were rich, you would have enjoyed luxurious wool or feathers in your mattress.

Even though the Renaissance was a time of art, knowledge, and innovation, bed construction changed very little from the medieval counterparts. Usually, beds were made of pea shucks, straw, or feathers and were covered with rich fabrics like velvet, brocade, and silk. It wasn’t until the late 1700s that the mattress cane box came to be used, and mattresses became buttoned or tufted to keep the stuffing in the corners and edges of the mattress case.

The 1800s: An Era of Significant Change

Not much changed in the way of bed construction until the mid-1800s. In 1857, the steel coil was invented and used primarily in chair seats until the idea to use them in beds caught on in 1865. Just a few years later, the innerspring was invented by a German inventor named Heinrich Westphal. The waterbed also came to be around this time, for the purpose of preventing pressure ulcers on hospital patients. Then towards the end of the century, the box spring was invented and allowed mattresses to be less lumpy. As you can see, the 1800s brought great change for beds of the time and brought about the forerunners for our modern mattresses.

During the 1900s the mattress continued to evolve quickly, beginning with the widespread use of the innerspring and bed foundations. The futon was introduced in the 1940s and the foam mattress and pillows in the 1950s. In 1960, the old-style waterbeds modern counterpart was introduced with air mattresses coming onto the scene only twenty years later. With the changes in bed construction and materials, came changes to sleeping styles as well. Spacious sleeping became popular during the 1990s and in 1999 the Queen was the preferred bed size choice over the twin. Mattresses have continued to evolve to what they are today to provide modern sleepers millions of ways to get their nightly z’s.

Is Your Bed Ancient?

Does your bed resemble what ancient sleepers slept on? Has it been awhile since you’ve replaced your mattress? It’s time to come into our Waterbury location and get a modern bed that will have you counting the hours you’ve slept instead of the sheep. Buy your new mattress today!